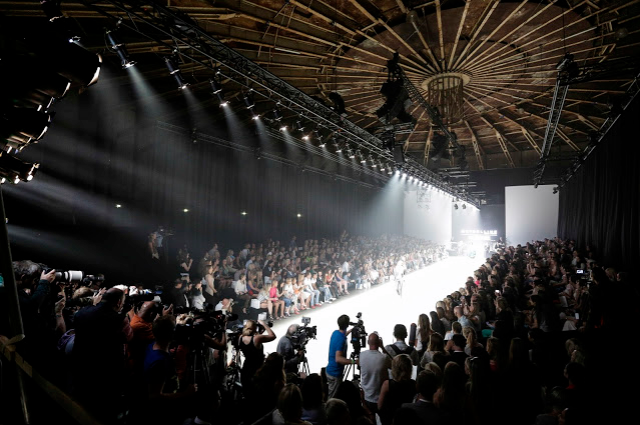 Advertised as a fashion week, the 10-day Amsterdam Fashion “Week” is a numerically incorrect, yet conceptually stunning fashion show that highlights the work of some young, up-and-coming Dutch designers. The 19th edition of this fashion week was held from the 6th-16th of July and with over 20,000 ‘likes’ on Facebook, it seems to have been quite a hit.

To me, these shows are some of the rawest and most enjoyable that you will find. Not tied down by the conventions of regular fashion weeks, the designers are encouraged to be as creative and inventive as possible. The aspect of the week that was the most eye-catching was the “Fashion Lab,” an initiative that gives young designers access to cutting edge technology in the fashion world.

The accessories for this show certainly were not something I am accustomed to, but that is in no way a bad thing. The variety was quite bizarre, but equally quite fresh and some of the accessories even included people. These accessories ranged from the occasional piece of conventional jewellery, to one man carrying someone in what looked like a banana suit. Similarly, one of the designs was of a woman who had accessorised her look with four men carrying her down the runway.

As with every other profession in life, networking is quintessentially the most important aspect of advancing your career, and the opportunity given to the 14 designers who featured on this years ‘lichting’ catwalk will undoubtedly serve as a great springboard for their careers.

Voted as the best new talent during the ‘Lichting’ catwalk by fashion journalists, key industry figures and senior lectures from several of the Dutch universities of design was Henriette Tilanus. Take a glimpse at some of Henriette’s work below.

Sponsored by G-Star RAW, you can see glimpses of the ‘lichting’ catwalk here
http://www.youtube.com/watch?v=g9N__CH4sPQ

Here’s a link to the Fashion Week page
http://www.amsterdamfashionweek.com/en